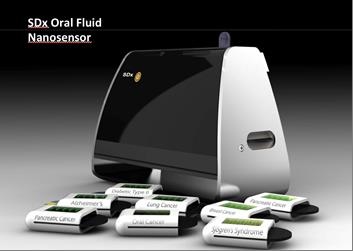 An experimental device from UCLA scientists has successfully detected evidence of lung cancer in the saliva of diseased mice. The research, reported in the June 13 issue of Biosensors and Bioelectronics, may one day lead to a totally non-invasive way to detect and monitor human disease.

The experimental device analyzes genetic material from exosomes, tiny sacks that cells, including cancer cells, release into saliva and other body fluids.Â  Called Electric Field-Induced Release and Measurement (EFIRM), the device produces results in minutes, suggesting it may offer a faster and more convenient alternative to biopsy.

The study was the first in which exosomes from tumors had been detected in saliva.

UCLA CTSI awarded lead study author Feng Wei a total of $9,805 for services of the UCLA Electron Microscopy Services Center and the UCLA Nano and Pico Characterization Lab. These powerful imaging technologies were needed to identify the form and structure of exosomes, which are 1,000 times thinner than a human hair.Â  The research supported by the CTSI "provided solid scientific evidence that the exosome can be extracted from body fluid by the EFIRM," Dr. Wei, an adjunct assistant professor at the UCLA School of Dentistry, said.

The research was conducted by a multidisciplinary team with expertise in biology, dentistry and engineering.

The ultimate goal of the research is a point-of-care device for diagnosis of high-impact human disease via biomarkers in body fluids. These sensors could provide a home-monitoring or fieldwork device for patients or researchers, Dr. Wei said.

Next steps include verifying and validating EFIRM in human lung cancer patients. Specifically, researchers will use EFIRM to analyze patients' body fluids for mutations in the epidermal growth factor receptor (EGFR) gene. Mutations in EGFR are not only associated with cancer, but may also cause tumors to become resistant to anti-cancer drugs.Â  Timely detection of mutated cancer genes may allow physicians to adjust their treatment strategy for patients, Dr. Wei said.

In addition, the team plans to further develop its point-of-care prototype device for body fluid biomarker detection, which can be accommodated with the EFIRM technology for exosome-based cancer study.Â  The technology has been licensed to RNAmeTRIX, a diagnostic company founded by David Wong, senior author of the research.