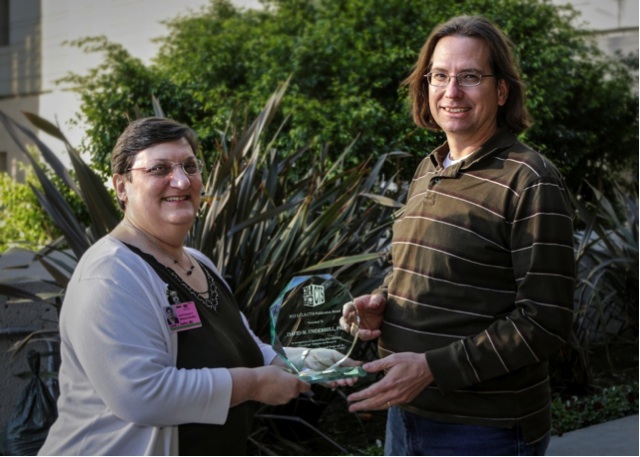 The research was published in the June 8, 2012 issue of Science.

"We put a lot of novel technology into the research and we are grateful for the CTSI's help," Dr. Iliev said. The award, he said, "inspires us to continue."

CTSI Publication Awards honor high-impact research that utilizes the resources of the CTSI. In 2011, Dr. Underhill received a $10,000 CTSI voucher for core services, which his team used to sequence and characterize fungal microbiomes in humans and mice.

Although scientists have known that fungi exist in the gut, "we're among the first to investigate what types, how many, and whether they're important in disease," said Dr. Underhill, an associate professor and director of the Graduate Program in Biomedical Science and Translational Medicine at Cedar-Sinai. "We were truly stunned to see just how common fungi are, identifying more than 100 different types" and seeing linkages to digestive disorders.

To determine whether fungi contribute to inflammatory disease, the study focused on a protein called Dectin-1, which is produced by white blood cells and used by the immune system to detect and kill fungi. In a mouse model of the disease, researchers found that the protein is important in protecting against inflammation caused by indigenous fungi. The finding has significant implications for human disease, as a variant of the gene for Dectin-1 is strongly associated with severe forms of ulcerative colitis.

In addition to studying gut fungi in the mouse, Dr. Underhill and colleagues did pilot sequencing on two samples from humans and determined that people also harbor a rich and diverse fungal microflora. These data were used in successful grant applications to the NIDDK (R01DK093426; $2.5 million over four years) and to the Crohn's & Colitis Foundation of America (Senior Investigator Award; $350,000 over three years).