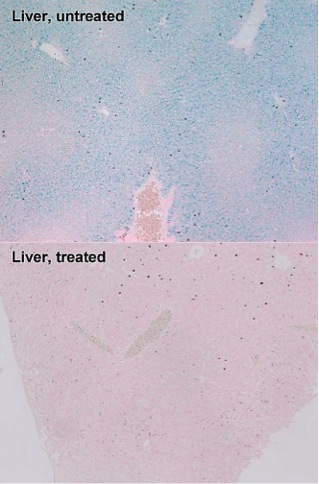 With support from the CTSI, UCLA scientists have developed a potential new treatment for diseases that cause destructive amounts of iron to accumulate in the heart, liver and other vital organs.

The experimental drug, called minihepcidin, is a re-engineered version of the natural hormone hepcidin, which regulates iron levels in the body. People deficient in hepcidin absorb too much iron from food. Because the body has no natural way to rid itself of excess iron, it is stored in tissues, mostly commonly the liver, heart and pancreas.

In separate studies, scientists tested minihepcidin in mouse models of two inherited iron-overload disorders. In the first study, scientists tested minihepcidin in a mouse model of human hereditary hemochromatosis, the most common form of iron-overload disease. Scientists found that daily injections of minihepcidin for a period of two weeks prevented development of iron overload in mice with the symptoms of human hereditary hemochromatosis, which affects five of every 1,000 Americans. The study was reported in the Nov. 1, 2012 edition of Blood.

In the second study, scientists tested minihepcidin in a mouse model of human beta-thalassemia, an inherited disease in which hemoglobin, the iron-rich protein that carries oxygen from the lungs to all parts of the body, is defective. Patients with severe beta-thalassemia, also known as Cooley's anemia, suffer from iron overload and anemia. Scientists found that mice treated with low dose minihepcidin for two weeks experienced an improvement in their anemia. The research will be presented in April at the annual meeting of the International BioIron Society in London.

Elizabeta Nemeth, PhD, associate professor of medicine and a co-author of both studies, received an $8,500 voucher from the CTSI to use the UCLA Biotherapeutic Synthesis Facility, where minihepcidin was produced.

Researchers said minihepcidin may one day be used be used alone or with existing therapies to prevent dangerous iron build-ups in patients. To reduce excess iron currently, hemochromatosis patients regularly have blood removed while thalassemia patients with must undergo iron chelation therapy.

Merganser Biotech of Newtown, PA has an option to license minihepcidin, which was discovered in the laboratory of Tomas Ganz, MD, PhD, professor of medicine and pathology, and Dr. Nemeth, co-directors of the UCLA Center for Iron Disorders. A UCLA patent on minihepcidin is pending.

Drs. Ganz, Nemeth and Ruchala have stock in Merganser Biotech.