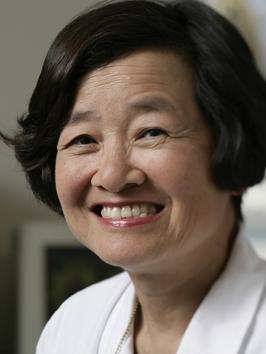 Dr. Christina Wang is a lead investigator on the study.

A new NIH-funded clinical trial will evaluate the effectiveness of a male contraceptive gel to prevent pregnancy. The gelâwhich contains a progestin compound (segesterone acetate) plus testosteroneâis applied to a male volunteer's back and shoulders and absorbed into the bloodstream. The progestin is intended to block natural testosterone production to reduce sperm production to low to nonexistent levels while the replacement testosterone maintains normal sex drive and other functions.Â

One of clinical trial's two lead principal investigators is Christina Wang, M.D., an associate director for the CTSI and endocrinologist at Los Angeles Biomedical Institute.Â

The study will involve various investigators and sites from NICHDâs Contraceptive Clinical Trials Network and has a target enrollment of 420 couples and will consist of two phases. In the first phase, male volunteers will use the gel each day for four to 12 weeks. Those whose sperm levels remain high enough for conception will continue use of the gel for up to 16 weeks. Those who tolerate the gel and exhibit low enough sperm levels will move on to the next phase where subjects use the gel as an exclusive means of contraception with their partners for 52 weeks.

The gel was developed by the Population Council and NIHâs Eunice Kennedy Shriver National Institute of Child Health and Human Development (NICHD).Â Â