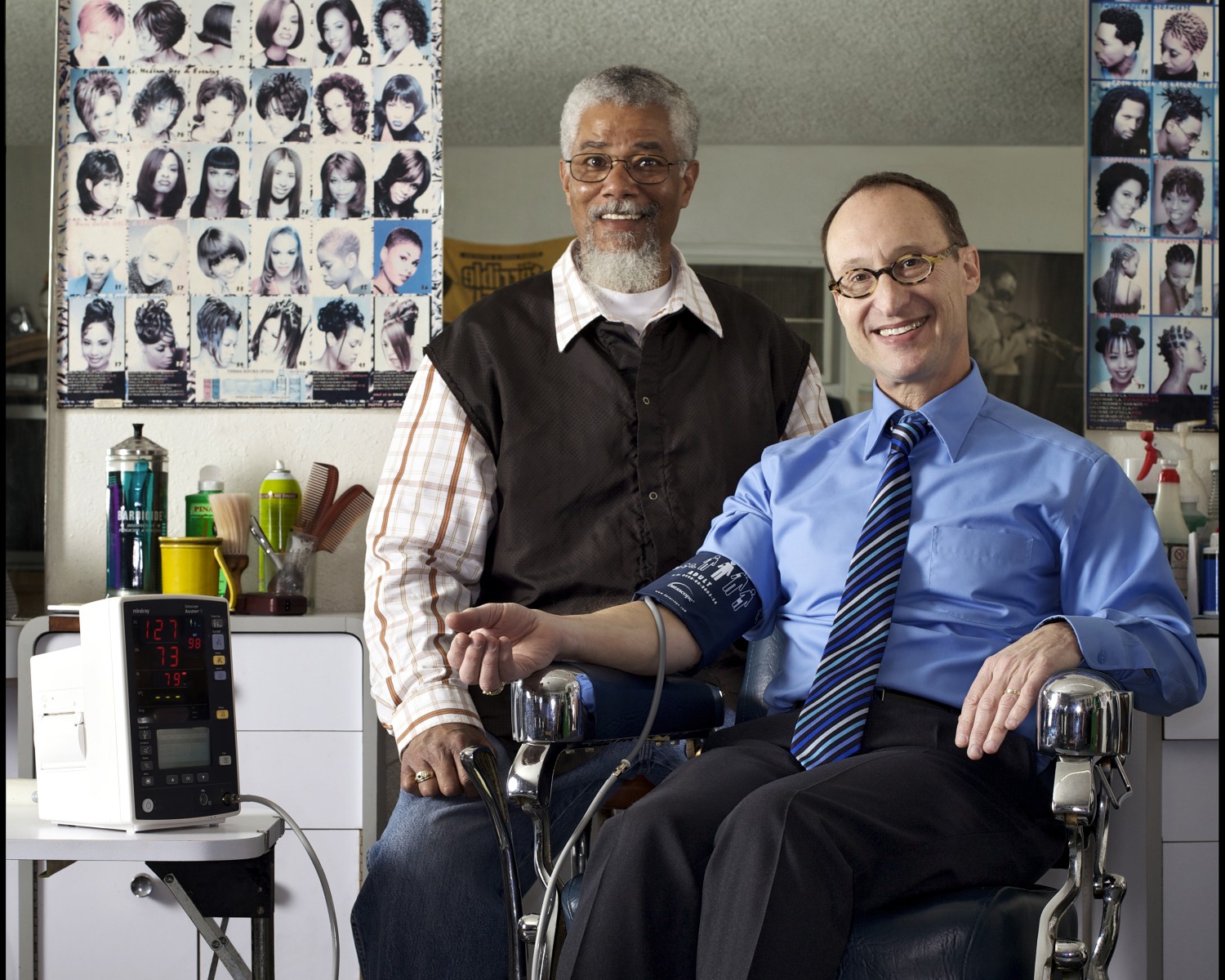 The late Ronald Victor, MD, is shown having his blood pressure taken by barber Wally Riddle.

The study,Â published last year in the New England Journal of Medicine, was selected for the Herbert Pardes Clinical Research Excellence Award from among 10 finalists that had been named asÂ  the top clinical achievements of 2018.Â

Dr. Victor demonstrated that black men with uncontrolled hypertension could sustainably bring their condition under control if they received regular blood-pressure checks and prescriptions from pharmacists in their community barbershops.

Dr. Victor partnered with 52 black-owned barbershops in Los Angeles, where barbers encouraged their patrons to get their blood pressure checked. Nearly 320 men were found to have uncontrolled hypertension and were enrolled in the study. The barbershops were randomized to nudge patrons do one of two things: make an appointment with their doctor or meet in the barbershop with a pharmacist who could provide a prescription for blood pressure medicine on the spot.

More than 63% of the men who received medication from pharmacists lowered their blood pressure to healthy levels within six months compared to less than 12 percent of men who were advised to see their doctors. A second study in Circulation showed that results were sustained over 12 months.

The UCLA CTSI supported the research by providing pilot funds and a community-engagement consultation to help identify barbershops, and by facilitating a collaboration between Dr. Victor and UCLA biostatistician Dr. Robert Elashoff. The UCLA CTSI is funded by a grant from the NIH's National Center for Advancing Translational Sciences. Dr. Victorâs study also was supported by the National Heart, Lung and Blood Institute. 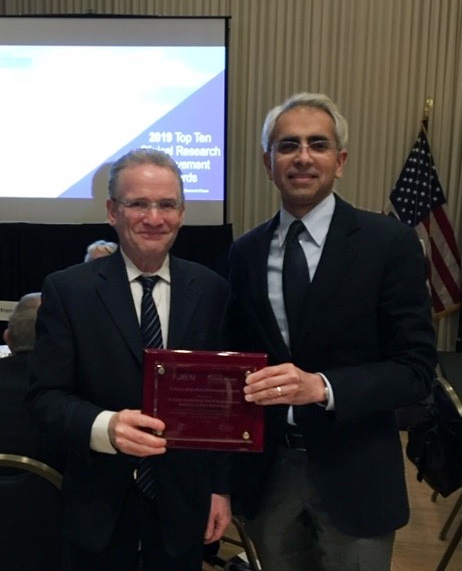 From left: Drs. Steven Dubinett (Director of the UCLA CTSI) and Ravi Thadhani (Vice Dean for Research and Education at Cedars-Sinai) hold the Herbert Pardes Clinical Research Excellence Award at the 2019 Clinical Research Forum on March 5, 2019.

âRonâs innovative and inspiring work spoke to the heart of our CTSI mission â to improve health and health care in Los Angeles, especially among the underserved,â Dr. Steven Dubinett, director of the UCLA CTSI, said. âThis recognition from the Clinical Research Forum is well deserved."Â

Dr. Victor died last September. An administrative supplement awarded to the UCLA CTSI and led by Dr. Victorâs former colleagues at Cedars and UCLA will implement the barbershop intervention in Nashville, in partnership with the Vanderbilt CTSA.

"Not only do we miss Ron's smile and smarts, but science is all the much poorer for his loss," said Dr. Eduardo MarbÃ¡n, director of Cedars' Smidt Heart Institute, where Dr. Victor had been associate director. "Our institution will forever attempt to carry on his scientific ingenuity, passion for serving his community and commitment to advancing the field of clinical research."

The Clinical Research Forum Board of Directors selected winners based on the degree of innovation and novelty involved in the advancement of science; contribution to the understanding of human disease and/or physiology; and potential impact upon the diagnosis, prevention and/or treatment of disease. All nominated studies were published in peer-reviewed journals between November 2017 and December 2018.

The award-winning studies exemplify major advances resulting from the nationâs investment in research to benefit the health and welfare of its citizens, and reflect the influential work being conducted by investigators at research institutions and hospitals across the United States, as well as at partner institutions from around the world.

âWe were gratified to see among all of the nominations that the level of scientific rigor, quality, and innovation was truly outstanding,â said Harry P. Selker, MD, MSPH, chair of the CR Forum Board of Directors. âIt was a very difficult decision-making process, but as a result, we can say with confidence that these ten studies are truly remarkable.â

The 10 research studies were recognized and celebrated at a gala dinner and reception at the National Press Club on March 5.