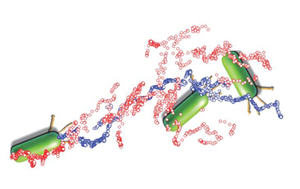 A computer model of bacterial migration on surfaces

A collaboration led by the UCLA Henry Samueli School of Engineering and Applied Science has been awarded a $1.6-million grant to study the formation of colonies of bacteria, with the goals of improving treatment of infections and exploring beneficial uses of bacteria in biofuels and other applications.

Gerard Wong, a professor in the bioengineering and chemistry departments, a member of the California NanoSystems Institute, and the UCLA Center for Biological Physics, will lead a team that includes researchers from Oxford University, the University of Cologne and Dartmouth University. On March 19, the Human Frontier Science Program, based in France, announced the award.

Wong and his team will focus on the early stages of the formation of biofilms, or communities of bacteria that cluster together on surfaces such as living tissue, artificial hips and the hulls of ships. Bacteria in biofilms are as much as 1,000 times more resistant to antibiotics than they would otherwise be, and are more likely to cause life-threatening infections in humans.

Wong's interdisciplinary group of bioengineers, materials scientists, biophysicists, microbiologists and experts from other fields will investigate biofilms' cell-to-cell signaling, movements and the production of exopolysaccharides (EPS), sugar residues that are key to their formation and reproduction.

"The life cycle of a biofilm is not well understood," Wong said. "A better understanding of the earliest stages of biofilm formation could lead to improved treatments for lethal persistent bacterial infections and longer lasting biomedical implants, such as catheters and artificial hips."

Wong also said the work could lead to more efficient synthesis of biofuels and reduction or elimination of "biofouling," or massing of organic material, on the hulls of ships.

Wong joined the faculty at UCLA Engineering in 2009. He has received several awards and honors, including an Alfred P. Sloan Foundation fellowship in 2004 and an American Physical Society fellowship in 2012.

The four-year grant awarded to Wong's team was one of 23 the Human Frontier Science Program issued after receiving roughly 700 applications from around the world.

The researchers initially received a Transdisciplinary Seed Grant co-sponsored by the UCLA Office of the Vice Chancellor for Research, the Academic Senate Council on Research and UCLA Clinical and Translational Science Institute.