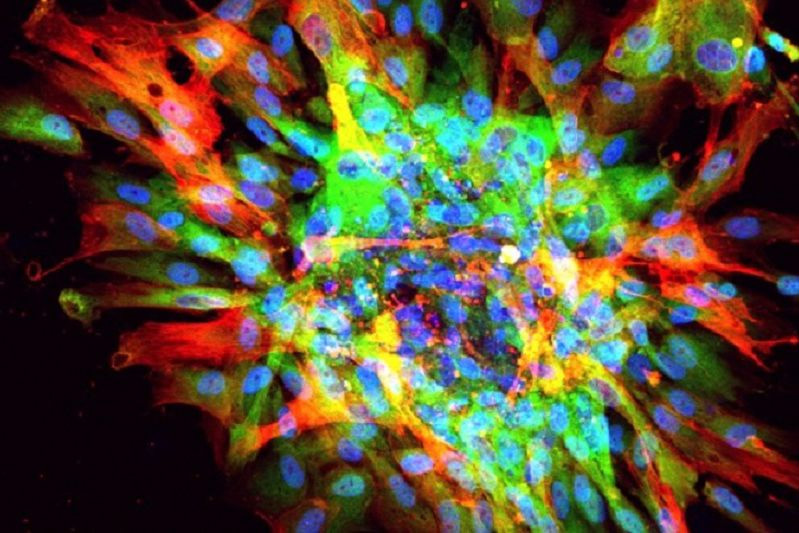 Microscopic image of scarring in a dish, showing evidence of fibrosis (red, green) and nuclei of all cells (blue).

Every organ in the body is capable, to some extent, of repairing itself after an injury. As part of this process, scar tissue forms and then recedes to make room for normal tissue when healing is complete.
However, when healing is disruptedâwhether by chronic injury or diseaseâthe cells that make up scar tissue can go rogue, continuously dividing and spreading until the scar eventually strangles the organ it was intended to help heal, which can lead to organ failure.
That progressive, out-of-control scarring is called fibrosis, and it can occur in any organ in the body. Fibrosis plays a major role in many diseases and conditions, including chronic kidney disease, liver cirrhosis, idiopathic pulmonary fibrosis, scleroderma and heart failure.
âMillions of people living with fibrosis have very limited treatment options,â said Dr. Brigitte Gomperts, a member of the Eli and Edythe Broad Center of Regenerative Medicine and Stem Cell Research at UCLA and former CTSI awardee. âOnce scarring gets out of control, we donât have any treatments that can stop it, except for whole-organ transplant.â
For decades, researchers have been seeking a therapy that can halt or reverse fibrosis, but one major roadblock has been the difficulty of replicating the complex, progressive nature of the disease in the lab, where possible treatments could be tested.
Now, a team led by Gomperts has developed a âscar in a dishâ model that uses multiple types of cells derived from human stem cells to closely mimic the progressive scarring that occurs in human organs. The researchers used this model to identify a drug candidate that stopped the progression of and even reversed fibrosis in animal models.Â

Their study is published today in Cell Reports.

Read the full UCLA newsroom press release. This research was supported in part by three CTSI Voucher Awards given to the first author on the study, Dr. Preethi Vijayaraj.Â