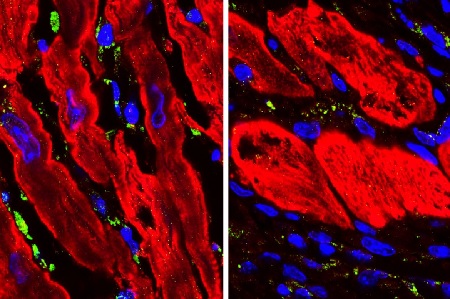 Microscopic images showing heart tissue in mice (with cardiac muscle cells in red) after a heart attack. Untreated tissue (left) shows more DNA damage (green) than tissue that has been treated with an experimental drug (right).

A study using mice by scientists at the Eli and Edythe Broad Center of Regenerative Medicine and Stem Cell Research at UCLA reveals that cardiac muscle cells play a pivotal role in determining how the heart heals following a heart attack. Â

The findings challenge a longstanding paradigm about heart repair and identify a protein that could serve as a target for drugs to treat or prevent heart failure.

Heart attack is the leading cause of heart failure, which kills more than 600,000 people in the U.S. each year.Â  An optimal repair response is critical for minimizing the amount of scarring after a heart attack because, once formed, heart scar tissue remains for life and reduces the heartâs ability to pump blood. This adds strain to the remaining heart muscle which, over time, can lead to the development of heart failure.